Coffee’s History through the “Third Wave” and the Future

The history of coffee is an ancient one, stretching into the murky past where the stuff of legends are brewed. Mythologized origins blend with historical fact in a story that is still being written. As questions arise about the current (and future) state of coffee’s place in the world, it is worth considering its evolving tradition through the ages.

The legend of coffee’s origin is by now a familiar one to most enthusiasts. The story goes that an Ethiopian shepherd called Kaldi was tending his goats. When the animals encountered some fallen fruit, they devoured it—as goats famously do—seeds and all. It was at this point that the creatures underwent a change, and began to leap and act out with inexplicable gusto. Kaldi puzzled at their perky behavior until it occurred to him that the fallen fruit must be the cause. Trying some of the fruit—seeds and all—he experienced for himself a rush of vigor and clarity such as he had never known. The fruit, of course, was that of the coffee plant, and the seeds coffee beans. As for the sensation that Kaldi underwent, it is one that every coffee drinker knows.

However apocryphal this story may be, most experts agree that the first coffee plants were of Ethiopian origin. Accounts of coffee consumption in one form or another abound throughout the Middle East, but the earliest accounts of actual cultivation of the plant situate the practice in Yemen around 500 years ago. Writings from this time suggest that monks of the region relied on coffee’s unique properties to sharpen their focus and stave off sleep during evening prayers. It is possible that the challenging topography and climate of the area discouraged the ready cultivation of more commonplace crops, thus creating an opportunity for coffee to thrive. In any case, coffee spread throughout the Arab world, permeated the Ottoman Empire, and eventually reached Europe. It is from these origins that the most popular species of coffee takes its name: Arabica. 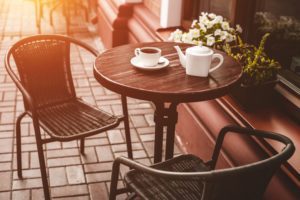 The social impact of coffee in Europe was unprecedented. For centuries, European nations had supported public establishments where strangers and friends could gather for the consumption of alcohol. The arrival of coffee hardly put a stop to this, but it did put a new spin on things. In contrast to the Ale House, the Coffee House arose as a place not for diversion and lethargy, but a locus of discourse and stimulated thought. Where some patronized those establishments where the events of the day could be forgotten, others occupied the Coffee House, where the latest news could be heard, discussed, and even acted upon. Café culture in Europe rapidly became associated with political interest. For the proponents of coffee, this set the cafe up as a kind of public university, where the latest viewpoints could be accessed for the price of a cup. For those in power, however, the café came to represent a hotbed of revolutionary thinking, and a threat to the status quo. By the end of the 18th century, this concern would be validated time and again—with more proof to come.

Coffee in America from the Revolution to the First Wave

The popularity of coffee in America today is well known, and unsurprisingly it owes some of that success to the Revolutionary War. During that time, tea fell infamously out of favor with American colonists, positioning coffee to take its place as the national beverage. It remained so into the next century and through the American Civil War, where the Union Army even made early attempts to develop a coffee concentrate for its soldiers on the march. The latter half of the nineteenth century saw rising demand for uniformity. Americans sought greater consistency from beans to brew. In answer, new roasters like John Arbuckle began offering pre-roasted coffee in sealed packages. His Ariosa brand coffee took the guess work out of roasting beans, and delivered consistent flavor to the home. Other roasters such as Caleb Chase and James Sanborn soon followed suit. Standardization became the order of the day, in an era that has come to be known as the “First Wave” of modern coffee.

Through the first half of the twentieth century, consistency ruled supreme. Coffee had become the standard drink in America, and the expectation was that every cup be universally the same in flavor and quality. Free refills were a given. Access to a simple cup of coffee had practically become a right.

Lost in this culture of uniformity was any thought for the growth of coffee. Treatment of coffee as a commodity had overridden any regard for where beans came from, how they were cultivated and harvested, or how these origins made them unique.

Change occurred in the late 1960’s, when Alfred Peet opened a coffee shop and roasting facility in Berkeley, California. Instead of focusing on uniformity, Peet sought to accentuate natural flavors and essences occurring in his coffee. This sparked a surge of interest in fresh, artisanal coffee that would put Peet’s coffee on the map, as well as other major players like Starbucks.

The Third Wave of Coffee

If the second wave of coffee centered on consumer tastes, then the third wave was all about consumer awareness. By the late 1990’s, coffee culture came to be understood as existing beyond the cafés where drinks were sold. Everyday consumers wanted to know more about their coffee than its flavor profile, or how it was made. They wanted to know where it was produced, and by whom. Every minute factor, from region, to production practices, to roasting and storing, became a marker of quality.

Some experts say that we have entered a fourth wave of coffee. The hallmarks of our current coffee culture are increased consumer consciousness and the call for greater accountability within the industry as a whole. It is not enough to know that a quality product is produced—we demand to know that it is produced responsibly and with dignity. Happily, the pursuit of quality directly supports this ethos. Specialty coffee drinkers expect to know precisely where and how their coffee is made. Traceability from farm to cup has become a new industry standard, one that increases accountability for coffee growers and traders with regard to environmental impact and human rights. Whatever forces have shaped the growth of coffee through the ages, it is fitting that the passion of coffee drinkers today should guide its future.