Arabica and Robusta – A Gourmet’s Guide

Spend enough time investigating coffee culture, and you will eventually hear the terms Arabica and Robusta. Most everyday connoisseurs are familiar enough with these designations, and perhaps some of their implications—but what do these terms actually mean? Let’s examine these two broad categorizations from a few different angles.

and Robusta – What are they?

Coffee as most consumers know it, is derived from coffee “beans” which are actually the seeds of the coffee tree. Coffee is a fruit tree that develops self-pollinating flowers and eventually cherry-like fruit about five years into the plant’s lifespan. These cherries contain the seeds that we know as coffee beans. Once ripe, beans are extracted and dried so that they can be shipped for roasting. There are many regional factors that contribute to the original flavor of the beans, hence the practice of referring to specific roasts or batches by their place of origin, such as Sumatran, Ethiopian, or Honduran. However, despite these regional indicators, all consumer coffee falls under one of two broader labels: Arabica or Robusta.

Of all the known species of coffee trees, the two most common are Coffea Arabica and Coffea Canephora of the Robusta variety. In coffee jargon, these two species of plant are referred to simply as Arabica and Robusta, and are considered to carry distinct profiles and uses.

Of these two types, Arabica beans contain higher amounts of flavorful elements such as lipids and sugars. Though it varies by location, Arabica beans tend to be more flavorful when grown at higher altitudes. Cultivation, therefore, can become a costly matter due to accessibility.

Robusta beans carry a reputation for being less flavorful than their counterparts, and are higher in caffeine. Though less desirable from a gourmet standpoint, the species is nonetheless heartier and easier to cultivate than Arabica, making it a pragmatic alternative in many regions.

Arabica represents the oldest known species of coffee ever cultivated by humans. The earliest accounts of roasting and brewing beans into a drink come from Arab scholars out of Yemen, hence the honorific Arabica. Just as it is prized today, Arabica remained the coffee of choice for centuries. However, this dominance came into question during the latter half of the nineteenth century, with the proliferation of an agricultural disease, hemileia vastatrix, or coffee rust. So-called coffee rust takes its name from the fungal stain that develops on the leaves of diseased plants. In time, the rust causes leaves to fall away, and the plant dies. At its first appearance in 1869, coffee rust decimated the coffee industry in the East Indies. This sudden threat to the coffee trade inspired a search for a more disease-resistant species of coffee. Coffea canephora made its appearance in the Belgian Congo, and was dubbed Robusta for its hardy nature. Though it produced a less agreeable product, Robusta’s ability to resist disease and grow at lower altitudes in warmer, wetter conditions made it a popular choice for growers intent on hedging their bets. 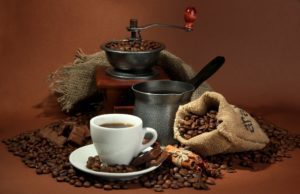 Today, Arabica accounts for about 70 percent of the world’s coffee, with Robusta making up the remaining 30 percent. Since Robusta’s relatively harsh taste and high caffeine content make it less ideal for drinking, it has developed into a source for byproducts such as coffee-flavored bases and instant coffee. For pure consumption, Arabica remains the preferred choice, prized all the more for the challenges inherit in its cultivation.

For the gourmet coffee drinker, the most essential label is 100 percent Arabica. This is the starting point, ensuring that at minimum, a coffee’s pedigree is not thrown off by an attempt to stretch the final product by blending it with Robusta. But this is only the beginning. 100 percent Arabica (as it will appear on labels) is a stamp of quality—but not necessarily taste. As a crop, coffee remains so pliant to the nuances of cultivation that its flavor may be subject to any number of factors. These may include altitude, climate, and soil composition.

Subida coffee originates in Honduras, in the region just outside of Santa Rosa de Copán. There fertile volcanic soil meets with plenty of sun and rain for rich coffee cultivation. Honduran coffees are known for their full body and sweet finish, with Subida’s offerings being no exception. Flavor profiles encompass notes of chocolate and sweet citrus in medium roasts, and brown sugar and black cherry in dark roasts.

It would be a missed opportunity to grow anything but the best under such lush conditions, and so Subida’s coffees are 100 percent Arabica, ensuring optimal quality. Richness of taste and body are sure to delight the gourmet palette.

For the discerning coffee drinker, appreciation is not a mere matter of taste, but one of knowledge. There is immense enjoyment to be had in a delicious cup of coffee, but there is also satisfaction in expertise. To drink deeply of this knowledge is to become more than a consumer. One becomes a true connoisseur—and that is a joy in and of itself!